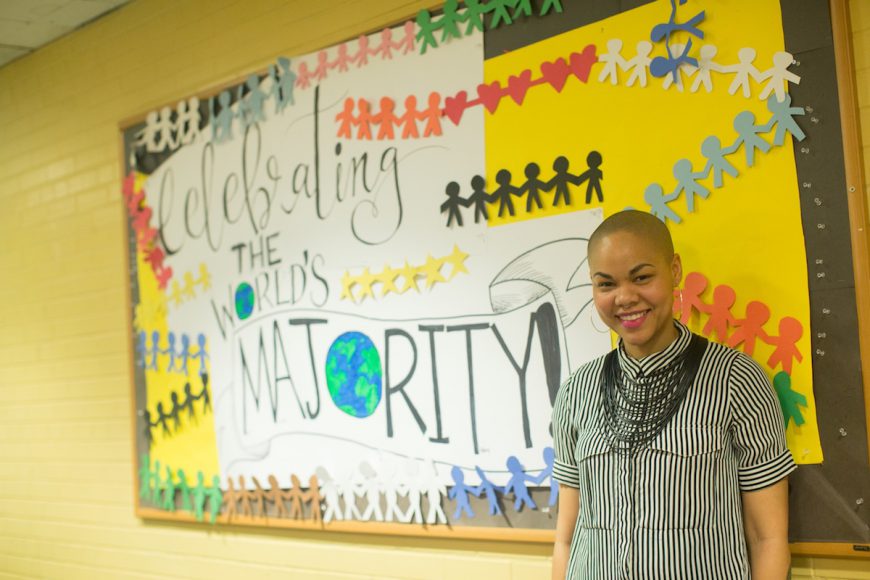 “An immediate impact was creating an environment where everyone felt equally valued and equally seen.” – Eleanor K., NYC Lab School

The inspirED Team at NYC Lab set a goal of promoting cultural competency at their school. They surveyed their school climate and with the results, created a school-wide celebration of diversity to address the issues that were most important to the members of their school community.

The hallways of NYC Lab School are bustling with community and conversation. For years, Principal Brooke Jackson has led the charge to infuse the school with social and emotional learning tools, aiming to support each student in developing the skills they need to maximize their potential. When the opportunity to start an inspirED team arose, Ms. Jackson enlisted the help of Alyssa Reckhow, a math teacher with a passion for collaborative and creative learning, and a group of students dedicated to bringing their vision for a positive school climate to life. One of the team’s first projects was to survey their school climate using a survey from the Yale Center for Emotional Intelligence. 201 students and 23 teachers completed the survey.

The results of the NYC Lab School’s climate survey were very encouraging. The most frequent emotions students reported feeling were “respected, comfortable, supported, happy, and connected.” Both students and teachers reported excellent relationships between school community members. Their highest-rated aspect of school climate was support for diversity, which was a very meaningful result in a school with a diverse set of students and educators.

By surveying their school climate, the inspirED Team was also able to gauge what they wanted to do or see more of in their school. During interviews with student team members, they described the importance of feeling like “your school cares about you,” and talked about the negative impact of interpersonal conflict and “drama” on their school experience. One team member said: “If we can create projects that bring people together across the grades, especially people who have maybe had problems in the past, that’s really supportive.” Another student described the importance of their inspirED work: “Especially as a teenager, emotions tend to be magnified and become tough to deal with, and I think learning about that and connecting it to a vision is really important. This inspirED Team is a great way to carry on that [work].”

Armed with these promising results, the inspirED Team set a goal of continuing to improve school climate through projects focused on multiculturalism and inclusion. The team knew that maintaining a positive school climate depends on continued efforts. They also hoped to harness the diversity in their school as a jumping-off point to discuss and create more positive outcomes. With the help of staff members, including heads of various cultural associations from across their campus, and about 80 student leaders, they worked to develop and host a day-long event called “Celebrating the World’s Majority.” At this event, school community members participated in workshops and witnessed performances aimed at heightening levels of awareness about the social and emotional experiences of being a student of color at NYC Lab. The event included dances, speeches, spoken word performances, along with cultural competency, identity, and informational (historical information sessions, political discussions, etc.) workshops, and a reflection assembly.

The NYC Lab School continues to benefit from ongoing efforts to improve school climate and support students’ social and emotional wellbeing.  When asked what changed as a result of their inspirED Team’s work, one student said: “Communication between people has really changed in a good way, including between students and teachers. For me specifically, I feel able to openly discuss my problems because of how I view education differently –  Now I view it emotionally.”

In addition to newly shared stories reverberating throughout the school community, students reported that they felt the school had transformed into a safe community space because of the nature of the welcoming, communal event. The event reinforced the importance of diversity and inclusion at NYC Lab, and set a precedent for future inspirED project work. Students felt that the use of the word “majority” rather than “minority” was a big step in the right direction towards valuing all students at the school, and that hearing about each other’s experiences created a sense of belonging for everyone involved. By selecting an issue that was central to the identities and experiences of the NYC Lab community, the inspirED Team was able to create an authentic and meaningful project that touched many people and positively contributed to their school climate.

In the future, the team at the NYC Lab School hopes to commit to making “World’s Majority Day” an annual event that serves as a starting point for year-long discussions and demonstrations regarding cultural competency and racial sensitivity. Specifically, students at the school plan to create and screen a documentary about race at the school at the last student town-hall meeting of the academic year. The team hopes to continue to foster emotional and social well-being at the school through deliberate events focused on promoting awareness and community that bring the students together in safe, emotionally-intelligent climates.